One of the country’s leading food authorities for more than a decade, Nathalie has written several cookbooks and has a popular cooking series on national PBS stations, the Learning Channel, and the Television Food Network.

Heat half of the oil in a large frying pan. Add the garlic and cook over medium heat until golden brown and tender, about 30 minutes. Add more oil as needed. Add the country ham and toss briefly to coat and marry the flavors. Set aside until needed, up to 1 day. When ready to serve, reheat the oil, garlic, and ham mixture. When hot, add the lettuce and toss for 1 or 2 minutes, until well coated with the dressing and slightly wilted. Taste. Add the herbs, vinegar and pepper as needed.

This recipe was inspired by a trip to the Emilian-Romagna area in Italy where Merle studied with Marcella Hazan. In this dish, country ham replaces the more expensive, imported Prosciutto. 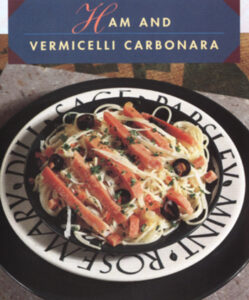 Brown the bacon in a heavy skillet over medium-high heat until it is cooked, but not crisp. Pour off the fat and set the bacon aside. To the same pan add the oil, butter, garlic, onion, and ham. Sauté lightly over medium heat. Cook the pasta in boiling water, and drain. Add the cooked vermicelli, bacon, cheese, half of the parsley (save the other half for garnish), salt, and peppers; stir to mix well. Turn the heat to low. Beat the eggs and pour over the pasta mixture. Toss quickly to coat the pasta evenly. Add the olives and toss again to mix them in. Transfer to a warm serving platter and sprinkle with the remaining chopped parsley. Serve immediately.

Named in Food & Wine’s Honor Roll of Chefs and in Cook’s magazine’s Who’s Who of Cooking, Marcel Desaulniers is executive chef and co-owner if the awarded Trellis Restaurant in Colonial Williamsburg, Virginia. 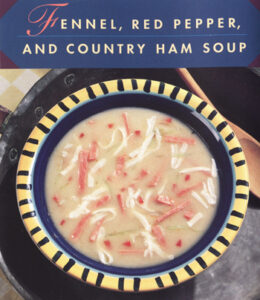 Heat the vegetable oil and water in a 5-quart saucepan over medium heat. When hot, add the celery, onion, and fennel. Season the vegetables very lightly with salt and pepper and sauté for 5 minutes. Add the red pepper and sauté for an additional 3 minutes. Remove from the heat and hold at room temperature. Heat the chicken stock to a boil in a 2 1/2 quart saucepan. In a separate 2 1/2 quart saucepan, melt the butter over low heat. Add the flour to make a roux. Cook until the roux bubbles, 6 to 8 minutes. Stir constantly to prevent browning and scorching.  Add the boiling stock and whisk vigorously until smooth. Simmer for 15 minutes. Remove from the heat and whisk in the grated cheese, 1 cup at a time. Add the sautéed vegetables and country ham. Adjust the seasoning with salt and pepper.  Serve immediately. (If desired, you may hold the soup in a double boiler for up to one hour before serving.) 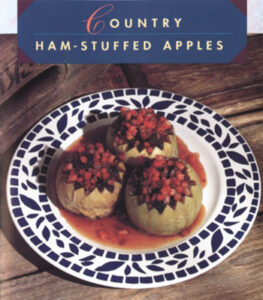 Soak raisins in Jack Daniel’s Whiskey, stirring often, for about 30 minutes. Combine ham, butter, raisins, and whiskey, pecans and brown sugar. Place the apples in a greased baking dish; sprinkle lemon juice inside each cavity. Divide the filling evenly among the apples. Bake for 40 to 45 minutes, basting the outside of the apples with vinegar.

One of America’s most talented chefs and inspirational cooking teachers, John is known for his creative combinations of foods and flavors. He is the founder of John Ash & Co., in Santa Rose, California, and is Culinary Director of Fetzer Vineyards Wine and Food Center at Valley Oaks. 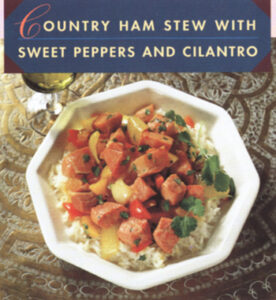 Heat 2 tablespoons of oil and the curry in a large, heavy skillet over moderate heat. Add the onions and garlic and cook until soft, but not brown. Add the tomatoes and cook for a minute or two. Stir in the sweet peppers, chile and raisins. Reduce the heat and simmer for 5 minutes. Add the remaining oil to a separate skillet and heat over moderate heat. Add the ham and cook for 2 to 3 minutes to lightly brown. Add beer, cover and simmer for 5 to 8 minutes. Add the ham and liquid to the vegetables and simmer covered for 5 to 7 minutes more. Uncover, stir in cilantro and season to taste with salt and pepper.

Featured as one of fourteen “Chefs Across America” in Gourmet magazine, Chef Lindeborg is a member of Les Dames d’Escoffier and is chef at Washington, DC’s nationally-acclaimed Morrison Clark Inn. 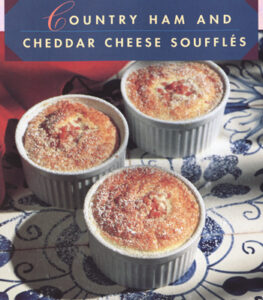 Using 1 tablespoon of butter, grease the bottom and side of soufflé dishes. Place milk in a saucepan, simmer and cool to lukewarm. Place the flour in a mixing bowl; pour in lukewarm milk while stirring with a whisk. Return mixture to sauce pan and cook while stirring over medium heat until thick. Cool mixture slightly and add remaining butter, cheese, ham, and egg yolks. Mix thoroughly and season with salt and pepper. Beat egg whites in a separate bowl until stiff, but not dry. Fold beaten egg whites into soufflé base. Fill the soufflé dishes to the top and bake in a water bath until puffed and light brown. Serve immediately. 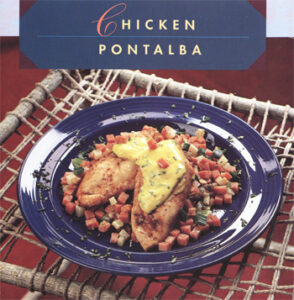 Melt 7 tablespoons butter in a shallow baking pan. Dip chicken breasts in the butter, coating them on all sides, arrange in the pan and bake in the hot oven for 10 to 15 minutes, or until lightly browned. Set aside and keep warm until ready to serve. Heat the remaining butter in a sauté pan. In it, sauté garlic, ham, mushrooms, onions and meat seasoning until the vegetables are slightly cooked.  Add wine and simmer gently to slightly reduce the quantity of the sauce. Meanwhile, fry the diced potatoes in oil heated to 365 degrees.  Remove with a slotted spoon when the potatoes are golden and crisp and drain on absorbent paper.

To serve: Add the fried potatoes to the vegetable wine mixture and toss lightly.  Put a spoonful of this mixture on each serving plate and top with one-half chicken breast. Top each chicken breast with 2 tablespoons Béarnaise Sauce and serve immediately.

Susan’s creativity in the kitchen is seen here and at Zinfandel American Restaurant in Chicago. It celebrates ethnic American cooking and features an all-American wine and spirits list. 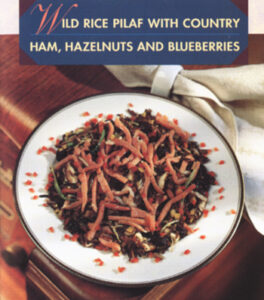 Simmer wild rice in plenty of salted water to cover until tender. Drain and let cool. Heat olive oil in a large skillet until fragrant. Add green onions, peppers and mushrooms to the skillet and sauté until tender. Add wild rice, tarragon, and nuts and toss until mixture is heated through. Add blueberries, ham, salt and freshly ground pepper to taste. Serve hot.

Sprinkle sweetpotato with salt and pepper; wrap in foil. Roast in center of oven at 375° F, 45 minutes or until tender; cool. In a bowl, toss cabbage with vinegar and garlic; season with salt and pepper. Peel and slice cooked sweetpotato into rounds; sauté with butter and honey until glazed; set aside. Heat oil in large pan; add cabbage. Toss 30 seconds. Add shredded chicken, bacon pieces and sweetpotato; toss for 1 minute. Add 1/4 cup Hot Bacon Dressing and toss. Serve immediately on warm plates. Sprinkle each salad with blue cheese and parsley.

Tom Condron is the executive chef of both the Mimosa Grill and Upstream restaurants in Charlotte, North Carolina. 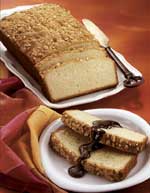 Cream butter and sugar; beat until light and fluffy. Add eggs one at a time, beating well after each addition. Blend in peanut butter, then flour. Pour into two lightly greased (bottom only) 9 x 5-inch loaf pans. Bake in preheated 350 F oven for 15 minutes., then sprinkle chopped peanuts onto batter. Continue baking for 35 to 45 minutes or until centers test done. Top each slice with Peanut Butter Chocolate Sauce (recipe follows). Makes 36 servings.

Variations:
• Stir 1 cup chocolate chips into batter before baking.
• Top with scoop of ice cream and chocolate sauce.
• Toast and spread with your favorite jam for a unique breakfast treat.

Former first lady and a true Southerner, Rosalyn Carter, developed his easy-to-prepare and delicious cake. It can be served as-is at a picnic or dressed up for special occasions.